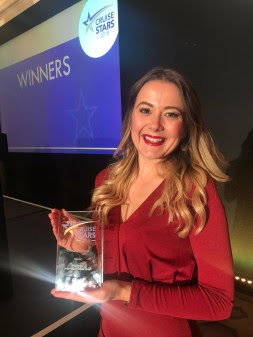 Ellis joined Fred. Olsen 18 months ago, during which time she has been involved in a number of key PR and community projects, including: the launch of Fred. Olsen’s fifth guest-funded RNLI lifeboat, Pride of Fred. Olsen; The Royal British Legion’s historic ‘D-Day 75 Voyage of Remembrance’ on board Boudicca; ’Elmer’s Big Parade Suffolk’, helping to raise £25,000 for Fred. Olsen’s local St Elizabeth Hospice; and Braemar‘s epic World Record transit of the Corinth Canal, in Greece.

“I would like to extend my congratulations to all our winners and those who were shortlisted for the ‘Cruise Stars Awards’. The quality of the entries was extremely high and the judges had to ponder long and hard to decide the winners. We thank them for their time, expertise and input.

“These awards highlight individual achievements across the length and breadth of the UK and we are delighted to once again recognise the outstanding talent that runs throughout the cruise industry.”

“I am so thrilled to be named the ‘Rising Star’ at the ‘Cruise Stars 2019’ awards. It has been a whirlwind 18 months since I joined Fred. Olsen Cruise Lines, and I have especially enjoyed working on projects that have helped to support and enhance the lives of others, such as our work with St Elizabeth Hospice, as part of ‘Elmer’s Big Parade Suffolk’, and the momentous ‘D-Day 75 Voyage of Remembrance’.

“My knowledge and experience in journalism has greatly benefited me in this role, and I am looking forward to developing my PR experience for another exciting year with Fred. Olsen in 2020.”

“We are all very proud of what Ellis has achieved, and she has proven herself to be a very valuable asset to the Public Relations team and to Fred. Olsen Cruise Lines as a whole. Ellis has moved seamlessly from a successful career in journalism to PR, and she has built up strong relationships with Fred. Olsen’s media and community partners.

“Ellis’ ‘can do’ attitude has seen her take on new PR projects, developed innovative community initiatives and helped us to make a difference and increase awareness of our brand. This recognition by the ‘Cruise Trade News’ experts is very well-deserved indeed.”