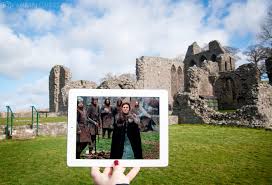 When the pilot episode of Game of Thrones was first shot in Northern Ireland, not many had imagined that it would initiate a global hit television series.

A decade later, the fantasy drama has turned out to be HBO’s most-viewed show, transforming Northern Ireland into a movie destination, boosting its economy.

To quote Richard Williams, the chief executive of Northern Ireland Screen, the agency that attracted HBO to the region, “The impact of Game of Thrones has been enormous.”

Williams added that the show’s global success was unexpected. “We invested very heavily in the pilot, without even knowing it would go to a series, so little did we know it would go on to be the biggest show in the world that would have a tourism spinoff.”

Chinese tourists are also visiting Northern Ireland on the back of the show’s popularity.
The last episode of the series aired on Sunday. Northern Ireland Screen gave the show 15.95 million pounds in production funding from the local government, in addition to UK tax breaks.

Judith Webb, the screen tourism officer at Tourism Northern Ireland, said that there is a proven connection between screen content and tourism.

Webb said, “GoT has transformed Northern Ireland into a leading international screen tourism destination, attracting many more visitors and fans of the show to explore the stunning landscapes, coastlines and mountains showcased in the series.”

Strangford, a village in County Down with a population of 450 which lies near to Castle Ward, was the location for many of the Winterfell scenes in Game of Thrones. It reported a 112 percent rise in tourist bookings early this year.

Williams, from Northern Ireland Screen, said, “If you talk to any extended family group in Northern Ireland, they will have some sort of connection. Somebody’s son, daughter or uncle is an extra. Somebody else is involved in providing facilities. Someone is a driver, someone is able to tell you a story about the cast coming into a local pub or restaurant. It’s a small place, so when you film something as big as GoT here, you end up with a scenario where everybody has some sort of connection to it.”

In addition to Northern Ireland, the show has been filmed in other locations, including Croatia, Spain, Iceland and Morocco.