Gatwick airport growth goes down by 25% due to drone chaos 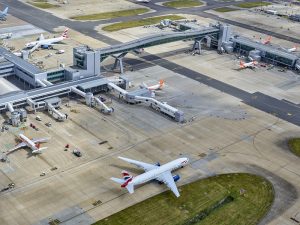 Gatwick airport growth witnessed a dented performance for 2018 by the drone attack bringing down the expected rise by one-quarter.

The Sussex airport was closed for 33 hours shortly before Chritsmas due to unauthorized drone activity that led to the cancellation of 1,000 flights. While it wrecked the travel plans of 150,000 passengers.

Over the past few years Gatwick Airport saw a rapid growth last year it handled 46.1 million passengers and making it the second-busiest in Britain.

In 2018, Heathrow reached a milestone and handled 80 million passengers for the first time. There was an increase of 2.7 per cent last as it used larger and fuller aircraft and it was one of the only seven airports in the world to achieve the milestone.

Africa and Latin America saw the most passenger growth and was up 9.3 per cent and 7 per cent respectively. The UK domestic flights declined.

John Holland-Kaye, airport’s chief executive said that they were on track to deliver an expanded Heathrow in the early years of Brexit, positioning Britain as the world’s great trading nations.

For almost an hour on Tuesday evening drone activity was responsible for closing one of Heathrow’s two runways.  The police approached the public for help to indentify the perpetrators.

Manchester, Britain’s third-busiest airport saw passenger growth of 1.7 per cent to 28.3 million. The group also includes Stansted which saw an expansion by 8.2 percent to 28 million passengers.

Tim Hawkins, the chief strategy officer said that the growth was due to the European Union’s single aviation market. He added that it was vital that UK and EU negotiators are committed to agree on a new ‘open skies’ aviation deal.

Flights on UK airlines to the European Union would be capped in the event of no-deal Brexit.