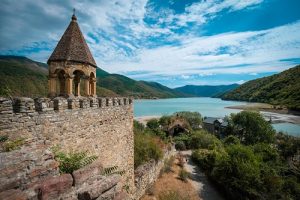 On Saturday, the Georgian government declared a state of emergency in the country due to the coronavirus pandemic. The decision has immediately spelled out a crisis for the nation that is used to welcoming foreign tourists over the years. The Georgia tourism industry has been a leading contributor to the country’s economy. However, the COVID-19 outbreak has been crippling the country’s tourism sector ever since its outbreak.

In the past few years, Georgia has emerged as a leading tourist destination. The country has since then depended largely on the increasing number of visitors. Back during 2019, Georgia with a population of 3.7 million has hosted around 9 million visitors.

The spring season has always attracted a large number of tourists in the country. However, in light of the coronavirus outbreak, Tbilisi, the capital of Georgia and one of the major tourist destinations is nothing but deserted and gloomy. Most of its tourist venues, eateries and hotels are empty.

Tamriko Sikharulidze, Owner, Gallery Palace Hotel said in a press statement after shutting down her property that it was a heartbreaking decision. She informed that the company has largely invested to prepare for a flourishing tourism season but had to close down due to the present circumstances. She also shared that for many individuals in the region, losing their jobs was a worse fear than the virus spread. She predicted that if the crisis continues for another two months, thousands will lose their jobs. The Gallery Palace Hotel is one of the major tourist accommodation venue situated in downtown Tbilisi.

Irrespective of the situation, Georgia authorities try to remain positive. Natia Turnava, Economy Minister, Georgia said in a press brief that the country has a liberal economy, healthy macroeconomic indicators as well as free trade with 46 countries including the European Union. She said that based on the resilient economy, the country is expecting a rapid post-crisis recovery. She mentioned that even though the crisis is severe it is manageable.

The Georgia government has allotted around $312 million to support the tourism industry alongside a four-month tax holiday and loan repayment assistance. Although experts are of the opinion that Georgia’s economy can cut down to half if the condition of the tourism industry fails to come under control till June.