Germany meets Austria at carnival celebrations of Rethymno in Greece! 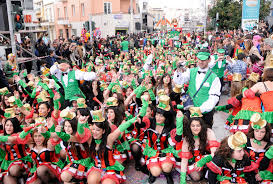 The Greek National Tourism Organization (GNTO) is arranging press trips to Crete. It would be done to promote the carnival celebrations of Rethymno to Germany and Austria. The main target of these trips is to promote the island as a gorgeous destination all through the year.

As per a statement, during February 26 – March 5, for German journalist Hans-Martin Koch, the GNTO office in Germany will arrange a press trip to Crete.

Koch will collect information to inscribe extensive articles on the Rethymno carnival and the tourism options of Crete during the shoulder months.

All of his features will be published in the daily newspaper “Landeszeitung Lüneburg”. The paper has a circulation of 40,000 copies and its readers are mostly educated class between 40-50 years old. Also, his articles will get published in a magazine that is distributed with the newspaper.

In the meantime to Crete, GNTO Austria, during February 26 – March 3, will invite Austrian journalist, Martin Swoboda.

Swoboda writes for “Salzburger Nachrichten” and “Die Presse” and will highlight the local events and several holiday options in Crete all through the year.

The 2020 Rethymno Carnival celebrations are organized under the auspices of GNTO.