Germany all set to host biggest samba carnival in Bremen 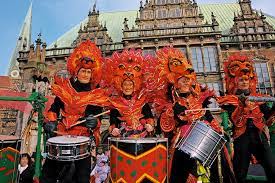 Germany is gearing up to host Europe’s biggest samba carnival this month in Bremen. The host city Bremen will burst into life on Feb 22-23. Every year, up to 35,000 spectators gather along the streets to watch this colourful extravaganza.

It’s an extravaganza of dazzling colours, flamboyant costumes, fanciful masks, amazing stilt walkers and pulsating drum rhythms. The real highlight is the grand parade of all the samba groups, as a sea of people, drums and exotic costumes thrusts its way from the market square to the bohemian Steintor quarter.

The atmosphere certainly will be dramatic when more than 100 samba groups with over 1,400 ‘sambistas’ from all over Germany and its neighbouring countries bring carnival spirit to Bremen’s city centre. As well as playing live concerts at a number of venues throughout the weekend, these samba groups will all be appearing at the grand parade on the Saturday (feb 23) – the highlight of the carnival.

A sea of people will be donning exotic costumes and beating their drums as they make their way through the city centre. The catchy rhythms will get the spectators tapping their toes in time to the music, if not actually dancing.