Getting Cruise Lines Showcases ITS World Class Offerings at Satte 2019 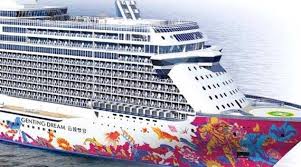 Genting Cruise Lines recently celebrated its silver anniversary commemorating 25 years of revolutionizing the Asian cruise industry which began with the very first sailing of Langkapuri Star Aquarius from Singapore in 1993. Founded a quarter of a century ago as Star Cruises, Genting Cruise Lines has grown to encompass three major cruise brands by also welcoming Crystal Cruises and Dream Cruises into its family. With the highest quality, reliability and safe “Made in Germany” ships, best in class hospitality with legendary Asian service origins and uncompromising North European marine safety standards, the three brands have been recognized as leaders in their respective segments in the global cruise industry.

Looking forward, 2019-2020 will be a very exciting year for Genting Cruise Lines highlighted by a USD50 million investment to transform the much loved SuperStar Virgo into Explorer Dream to further expand the fleet for the fastest growing cruise brand in Asia – Dream Cruises. In addition, Genting Cruise Lines will introduce the first of a fleet of 200,000 gross ton “Global Class” ships for Dream Cruises in 2021 along with innovative “Contemporary Class” ships for Star Cruises in 2023.

With the launch of the Explorer Dream, Dream Cruises will expand its fleet to three ships with Genting Dream based in Singapore, World Dream in Hong Kong / Guangzhou (Nansha) and Explorer Dream which will be based in Shanghai/Tianjin during summer and Australia/New Zealand in winter.

Since its acquisition in 2015, Crystal has also embarked on the most ambitious brand expansion in the history of luxury travel and hospitality through significant investment by Genting Cruise Lines, introducing two new cruise options – Crystal Expedition Yacht Cruises and Crystal River Cruises, complementing its highly acclaimed Crystal Sea and Crystal Air Cruises.

Commenting on the sidelines of SATTE 2019 on India’s contribution to the Asian Cruising Market, Mr. Naresh Rawal – Vice-President, Sales & Marketing, Genting Cruise Lines said, “India has the world’s fastest growing economy, thus leading to a rapidly expanding middle class and the need for evolving international travel options. Not only have we grown in the number of passengers year-on-year, but we have also seen a substantial growth in revenue”.

Adding on to comment about the evolution of Indian Travelers, Mr. Rawal continued by saying, “The Indian traveler has evolved over the years. Earlier they would just want to get a taste of cruising and so two-night itineraries would invariably be the most popular ones. But now, it’s the three, five and seven-night itineraries that most consumers opt for. As ships grow larger in size, consumers also understand that more nights are needed to be spent on board to fully experience all the facilities”.