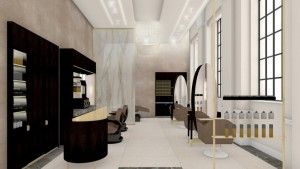 Four Seasons Hotel London at Ten Trinity Square welcomes the launch of London-based hair and beauty salon GiellyGreen on March 27, 2018. The luxurious on-site hair salon will take the Hotel’s beauty and wellness offering one step further and will mark the expansion of GiellyGreen from their flagship residence in George Street, Marylebone.

To complement services offered in The Spa at Four Seasons Hotel London at Ten Trinity Square, GiellyGreen’s award-winning stylists will offer hairdressing and barbering services for locals and guests. The salon will feature innovative technology and services, housed in a warm, welcoming space with a distinctive charm. Co-Founder and Creative Director of GiellyGreen Shai Greenberg has taken great care to create a contemporary, but also intimate and welcoming salon on the ground floor of the Hotel alongside the current Brioni menswear boutique.

Honed marble and limestone floors will complement the forms of the custom made, luxuriously finished dark oak furniture with chocolate, soft cream tones and decadent touches of gold throughout. Double height windows will allow natural light to pour in to the space. The client styling stations will feature vast oval mirrors cut from one sheet of glass, forming an eye-catching centrepiece. The stylist’s stations have been designed to look like personal dressing tables, making each guest feel at home in their own space in the salon.