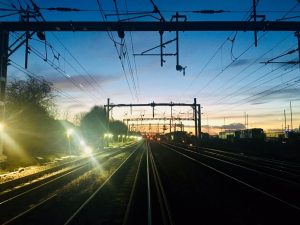 Network Rail will be delivering a £4m upgrade to a key junction on the southside of Glasgow this Easter.

Over the bank holiday weekend, Shawfield junction will be renewed with six sets of points (rails which move to transfer trains from one line to another) replaced and nearly 400m of new track laid.

Shawfield is a key junction on the west coast main line between Glasgow Central and London Euston – one of the busiest rail routes in Britain.

The upgrade being carried out this weekend will improve the reliability of the line and will mean the junction doesn’t need renewed for another 30 years.

Engineers will be working continuously around-the-clock from close of service on Friday night (April 19) until the early hours of Tuesday morning (April 23) to complete the project.

The team will use 11 engineering trains, and three specialist Kirow cranes to complete the job, with the existing infrastructure being cut up and removed before new track sections, which will be delivered in 50 pre-assembled panels, are laid.

Donald Morris, programme manager for Network Rail Infrastructure Projects, said: “Our engineers will be working hard to complete this complex programme as quickly as possible for passengers.

“The west coast main line plays a key role in the economic life of the country – carrying passengers and freight – and this work will help improve its reliability.

“We understand the inconvenience this work may cause to some passengers and residents, but such a huge investment in the railway cannot be delivered without a short-term closure of the line.”

The upgrade is part of £18m-worth of improvements being delivered across Scotland’s railway this Easter by more than 1,500 engineers.

Further south on the west coast main line, engineers will be working to renew tracks and a level crossing and improve under-line drainage between Beattock and Abington in South Lanarkshire.

In the north east, engineers will be replacing or refurbishing seven bridges and improving drainage as part of plans to double-track the line between Aberdeen and Inverurie later this summer.

Most of the country’s services are unaffected by this weekend’s investment programme, but some routes, particularly in Lanarkshire and the North East, will see significant changes.