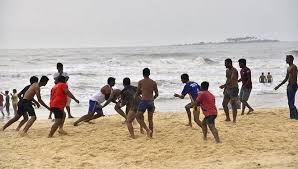 The Goa Small Industry Association (GSIA) has joined various stakeholders in claiming the ongoing tourist season has been poor for the traders and demanded the government immediately step in save to the declining industry.

The President of GSIA Serafino Cota said at a press conference on Monday said that tourism has gone downhill after the mining industry. There is no proper and systematic agency to monitor the activities of tourists. The focus on tourism is lost and the stakeholders are not taken into confidence in connection with various matters concerning the industry.

The association alleged that occupancy during the peak tourism season in December and January till date has not touched 50 percent. Large scale illegal tourism is underway which in turn has affected genuine businessmen. We provide 85 percent accommodation in the State but the government never consults us on any policy matters.

Claiming it to be the worst season for the small hotels and guest houses, Cota, on behalf of his association members demanded exempting small guest houses having less than 10 rooms from obtaining consent to operate under Water Act and Air Act, imposed by the Goa State Pollution Control Board. He also sought fire NOC for five years and to roll back the ‘arbitrary astronomical hike’ in excise fees for category C hotels and guest houses.

Herald had reported in its edition on December 26, 2018 that more than 90 percent starred hotels have not touched 100 percent occupancy despite Goa hosting several events for the Christmas and New Year festivities. Many 5-star hotels claimed they were forced to slash the tariffs while the other starred hotels had decided to not go for seasonal increase of room charges.

The Travel and Tourism Association of Goa (TTAG) has been repeatedly saying the season is bad while also charter operators, taxi associations and shack operators expressed their disappointment over the poor tourist season.

The Small and Medium Hotelier’s Association had last week blamed the local authorities for destroying the livelihood of the small medium enterprises in the name of development. Cota had cited shortage of water and power supply to cater the needs of coastal villages population and over exploitation and pollution of the ground water in the absence of sewerage system.