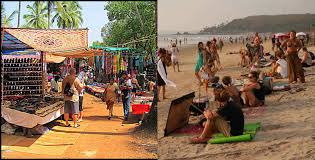 This season, there’s been a lot of talk about major drop in tourist numbers, fewer charter flights, lesser footfall at party venues and other destinations. However, the numbers only tell the story partially. The terrible state of Goa tourism, one of the key revenue generators for the state — impacts people along with their lives in several ways than what is captured by statistical data.

To comprehend the impact fully, we went out and talked with the stakeholders in the state’s tourism industry. However, these are not businessmen or bureaucrats who take the decision on policy matters. These are smaller cogs in the engine without which Goa tourism would disintegrate. So, there’s rickshaw driver Hanuman Divkar, who takes tourists around Calangute, or Motilal Chawan who runs an accessory store near Mandrem beach. There’s Maria Fernandes, who manages a beach shack in Baga for almost two decades. Each one of them has assured that they have not been making enough, or that business has been going down all through the season, barring the Christmas-New Year period. From working extra hours to reducing prices or looking for other job alternatives, they are trying ways of dealing with it.

Each morning, Lydio Silveira from Candolim goes to work at about 8.30 am. For the last 12 years, he has been operating his boat that takes tourists on dolphin rides. “We don’t have foreigners interested in these tours. So it’s mostly the Indian crowd. But the number of tourists has declined. In fact, this year has been the worst. We are hardly doing business. The number of rides per day has gone down a lot,” he says. He emphasized that majority of the boats are just docked at the Sinquerim jetty, as the number of tourists have dropped and the 100-plus boats aren’t required. “It’s a seasonal business. We shut during the rains, so this is the only time we can run our business. With demonetisation and implementation of GST, many Indian tourists have stopped coming, and some think twice before spending money,” he says.