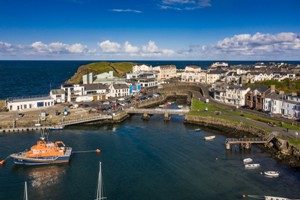 In a specially commissioned visual, the famous cliffs of Fair Head on the iconic Causeway Coastal Route have been digitally transformed into an Irish version of Mount Rushmore. The eye-catching sculpture features the images of Northern Ireland’s major-winning golfing greats, past and present – Rory McIlroy, Graeme McDowell and Darren Clarke, who will all be competing in The Open on their home soil, as well as former Open Champion and Portrush man, the late Fred Daly.

The tongue-in-cheek stunt, created with the help of Hollywood digital CGI artist Mike Campau, is designed to reflect how Northern Ireland is truly ‘Made for Golf’, illustrated not only by the country’s sporting prowess at the game, but also in its landscapes and rugged coastline.

Golf’s original major is making a return to Royal Portrush, a short journey along the coast from Fair Head, 68 years after it was last played there, and as the clock ticks towards tee-off time the excitement continues to rise.

As Open fever grips the nation, locals are getting giddy at the imminent influx of golf stars and their partners, caddies and entourages.

As the battle for the famous Claret Jug unfolds in Portrush, the game’s elite players will be welcomed and inspired by an unprecedented sell-out crowd of 215,000 Irish and international golf fans.

There will be massive support for the home-grown heroes, but fans will also relish and appreciate every shot from the likes of Tiger Woods, defending champion Francesco Molinari and world number one Brooks Koepka who’s caddy Ricky Elliott grew up in Portrush.

The seaside resort is well teed up to celebrate The Open and the town will be buzzing like never before with a host of top music and entertainment performers lined up for the Championship week, plus a wealth of special golf-inspired activities.

They include an interactive golf zone featuring a range of fun activities, including the 50-foot putt, a bunker challenge, a washing machine challenge, golf simulator and giant inflatable dart board.

An artisan marketplace will also bring high quality, locally produced gourmet food, as well as arts and crafts to the festival atmosphere.

And before and after the golf, Open ticket-holders and non-ticket holders alike can enjoy exploring Portrush’s thriving amusement arcades, restaurants, shops and bars as well as its harbourfront and amazing Blue Flag beaches.