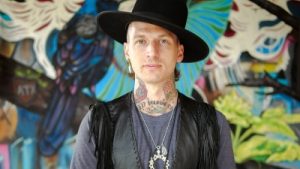 For two days this month, a steady hiss of air joined the normal chorus of sounds drifting across the picturesque back lawn at Four Seasons Hotel Austin. In this instance, however, the conductor was widely recognised muralist Jason Eatherly, wielding his “baton” – a can of spray paint – to transform a blank hotel wall into his latest canvas.

Even before the intoxicating fumes begin to wear off, curious guests drift over to watch as each confident stroke adds more dimension to Eatherly’s depiction of a great-tailed grackle, a bird that’s gained near-icon status in Austin.

“If you’ve lived here or even just visited for a few days, you’ve likely met a grackle,” says General Manager Rob Hagelberg, who embraced the iridescent black, purple and blue bird as the piece’s focal point after learning about their intelligence and cultural significance in Central and South America.

In Mexico, where the bird is often depicted by artisans, legend says the grackle originally had no voice so it stole its seven distinct songs from the wise and knowing sea turtle. Today, the grackle’s wide range of vocals represent the Seven Passions – love, hate, fear, courage, joy, sadness and anger – of life. “Given the proximity of the mural to our Latin restaurant Ciclo, it made perfect sense to incorporate the grackle into the overall design,” says Hagelberg.

Rounding out the 11-foot by 11-foot (3.4 x 3.4 metre) mural is a well-loved oak branch, upon which the grackle is perched, the word “Love” and several subtle words and symbols that will only be evident to a keen eye. “Our hope is the piece will spark conversation as our guests interpret its meaning and search for some of the playful messages hidden throughout,” says Hagelberg.

Eatherly is well-known in the local art scene for his positivity, commitment to trying new and different mediums and his love for beautifying unique spaces. His style – photo-realistic, with a little surrealism, abstract and collage, but also with a gritty street sense – is visible in his diverse portfolio, ranging from acrylic on hand-constructed canvas to large scale spray paint and roller murals.

“I would describe my style as a little bit of everything,” says Eatherly. “I never want to get stale within my work and stick to one thing. I love to change things up because it helps me learn and not get bored with what I’m doing.”

His most recognisable piece to date is an image of Queen Elizabeth (aka “Queen Eli”) wearing a paint mask, which originated as a small Sharpie sketch and has since been replicated on a larger scale around town. Most of his pieces reside in Austin – including four within a few blocks radius of Four Seasons Hotel Austin – though his work can also be found along the rivers of Colorado, in the New York subways and as far-flung as Finland.

“One thing that really inspires me is knowing that someone can walk by and see life in a different light,” says Eatherly. “When people see this piece in particular, I hope they get a little bit of inspiration and a sense of the vibe in Austin, but also the confidence to carry on and believe in themselves.”