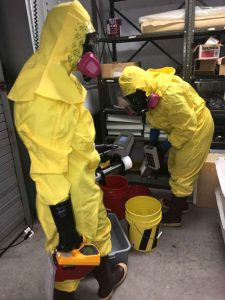 Tourists including children, employees in Grand Canyon in Arizona, have passed by three paint buckets stored in the national park’s museum collection building and been exposed to radiation without their being aware of it. Exposure to radiation has continued over 2 decades.

Last year, federal officials learnt that the 5-gallon containers were brimming with uranium ore. The park’s safety director alleges that nothing was done to warn the park workers or the public that they might have been exposed to unsafe levels of radiation. The radioactive specimens have been removed.

People accessing the park between the year 2000 and June 18, 2018, were ‘exposed’ to uranium. Stephenson said, “The radiation readings, at first blush, exceeds (sic) the Nuclear Regulatory Commission’s safe limits. … Identifying who was exposed, and your exposure level, gets tricky and is our next important task.” The building is located in Grand Canyon Village, Arizona.

According to Stephenson, the uranium specimens had been in a basement at park headquarters for decades, and were moved to the museum building when it opened, around 2000.

The Nuclear Regulatory Commission measures radiation contamination in millisieverts per hour or per year. As per Stephenson, close exposures to the uranium buckets could have exposed adults to 400 times the health limit, and children to 4,000 times what is considered safe.

Emily Davis, a public affairs specialist at the Grand Canyon, said the Park Service is coordinating an investigation with the Occupational Safety and Health Administration and the Arizona Department of Health Services.  As per Davis, there is no current risk to the park employees or public.