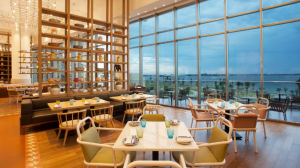 As Kerala springs back from floods and outbreak of Nipah virus last year, Grand Hyatt Bolgatty (GHB) is focussing on MICE and leisure business. They are keen on showcasing the state as a destination both for leisure and MICE.

As per Mausham Bhattacharjee, Director (Sales & Marketing), GHB, there has been room occupancy growth during Jan-Feb-March period, by 65 per cent, coupled with a rise in the convention business. The introduction of more domestic flights, direct air connectivity to Tel Aviv from Kochi, rise in the periodicity of tourist travel would help to increase footfalls.

Grand Hyatt Bolgatty has facilitated 250 MICE events since its inception in April 2018. Of this, 50 per cent are corporate incentive groups where more revenue generated. The association events constitute 20 per cent, 15 per cent business conclaves with exhibitions and more than 200 weddings and social events.

Colombo is a competitor of GHB. However, GHB has a USP of houseboats and backwaters. Mausham Bhattacharjee, says that it is a misnomer that taxation in India is high. Colombo rates are also on the higher side at 30 per cent, whereas ours was only 18 per cent. Room rates in Colombo are economical.

He said: “We are consciously trying to bring more congress and conventions since they do not just generate good revenues but also benefit the city overall”, he said adding that the largest ever event happened at GHB in terms of numbers is the physicians conference where nearly 10,000 delegates attended.”

GHB is acting as an aggregator for other five-star hotels in the region thereby contributing to a healthy growth of the hospitality industry in the area. This has been made possible by organising large conferences and meetings at the adjacent Lulu Bolgatty International Convention Centre, Anish Kuttan, Director (Operations) said.

GHB is also hosting the 12th edition of Convention India Conclave in August organized by India Convention Promotion Bureaus sponsored by the Tourism Ministry. There will be participation from professional conference organizers, conventional sellers from overseas. The B2B meet would showcase the availability of conventional venues in Kochi and help promote Kerala as a conference destination, he said.