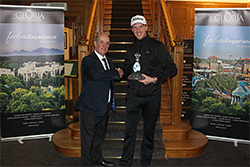 Car salesman Stephan Grant will be living life in the fast lane after turning in a Rolls Royce display to win a five-star holiday to Gloria in Turkey.

Playing off a five handicap, Grant left his rivals for dust as he hit top gear with two rounds of 71 at Mannings Heath Golf Club to seal his victory in the Mannings Heath Masters.

Hove-based Grant works in the family business SG Group and Sons, which specialises in high-end, previously-owned cars and proved his reliability with two rounds of one-under-par at the par-72 Sussex course.

After shelving his own ambitions to turn professional due to lack of sponsorship several years ago, the 27-year-old clearly still has plenty of ability and regularly represents his club in amateur events.

Grant said: “I wanted to win it really badly because of the prize on offer and played every day for two weeks to make sure I was in good form.  I’ve never been to Gloria before but I’ve done a lot of research and it looks amazing. I can’t wait to get over there.”

Since it opened in 1997, Gloria is now regarded by many as the leading golf and leisure resort in Turkey with three adjacent five-star hotels and a broad range of on-site activities away from the golf, making it an ideal destination for golf groups, couples and families.

Gloria Golf Club’s director of Golf David Clare, said: “Congratulations to Stephan on his victory at Mannings Heath. We look forward to welcoming him to Gloria.”