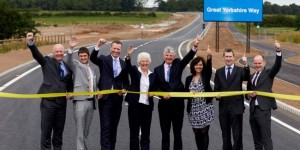 The second phase of Great Yorkshire Way which completes the direct link from the motorway network to Doncaster Sheffield Airport (DSA) has officially opened to traffic today (Friday 15 June).

Delivered by Doncaster Council and backed by the Sheffield City Region, this transformational project completed the last one mile connection from Bawtry Road to Hurst Lane.

The completion of the new road also comes on the same day as a new route to Belfast with Flybe starts operating from DSA, a key leisure and business route for the city region.

The road has proved a big draw for airlines with TUI recently announcing a 30% increase in seats from DSA for summer 2019, with six new routes including Yorkshire’s only direct long haul service to Orlando Florida.

There is now a continuous, high quality route to south east Doncaster from Junction 3 of the M18, reducing journey times for residents and boosting opportunities for local businesses to create more jobs.

The second phase will also provide additional cycle and pedestrian facilities linking new residential areas and the development area surrounding the airport to existing routes and the town centre. These facilities will be available by the end of June, after finishing off work has been safely completed.

Ros Jones, Mayor of Doncaster, said: “As we had hoped, Great Yorkshire Way is a fantastic success for Doncaster and the wider region.

“We always knew its impact would be hugely significant and lead to hundreds of millions of pounds of private sector investment in Doncaster. There are more flights to business and holiday destinations, the old colliery site at Rossington is being reclaimed and people are living in new family homes and finding more job opportunities at the iPort and other developments.

“Over 1,400 new jobs and almost 1,000 new homes have been created and this is all due to the collaborative approach we’ve taken to working with our public and private sector partners. With the second phase of the Great Yorkshire Way now complete, stimulating further economic growth and making the borough even more accessible to the people of Yorkshire and beyond, Great Yorkshire Way is one of the region’s most successful regeneration projects, investing in infrastructure in order to grow and transform the economy so that it works for the many not the few.”

Dan Jarvis, Mayor of the Sheffield City Region, said: “For a relatively short piece of road, the final stage of the Great Yorkshire Way will have a huge impact. Directly linking Doncaster Sheffield Airport (DSA) to the motorway network will make DSA far more accessible for people across the region.

“Our airport is already seeing success in terms of new routes, rising passenger numbers and an increased demand for cargo facilities. But there is further potential. I know that DSA can be as significant on the east of the Pennines as Manchester Airport is on the west.

“To help realise DSA’s potential, I’ve already submitted a bid to the Government’s Transforming Cities Fund. At the heart of this bid is a Global Innovation Corridor that stretches across the region, linking people to key sites including the airport, Sheffield city centre, the Advanced Manufacturing Park in Rotherham and Barnsley’s Digital Campus.

“And now we need to seize this momentum and also throw our collective weight behind the vision for an East Coast Main Line railway station at the airport. This would put our region’s airport firmly on the map for people all the way from London to Edinburgh, making it a first choice for business and leisure travellers nationwide.”

Robert Hough, Chairman of Peel Airports Group, said: “The road has not only played a huge role in making the airport so easy and stress free to get to but has also helped to bring new airlines and routes to DSA with our main airlines, Flybe, TUI and Wizz Air, now totalling 55 routes.

“It is a good example of how transport infrastructure helps unlock international connectivity, new housing, tourism, commercial development and people’s ability to move around.”

Rob Coldrake, Northern Region Finance Director for TUI UK and Ireland, said: “Our relationship with DSA goes back to day one of the airport, we saw the tremendous opportunity back in 2005 and our ambitious summer 2019 programme is further evidence of this. We’re delighted to be bringing long haul flying to Yorkshire with our Sanford, Florida service and also five new European routes. The opening of the new road will make it even easier for customers from the local area to get to and fly from the airport closest to home. We look forward to welcoming even more customers flying with us from DSA.”

Caroline Flint MP said: “For me this is the completion of a 21 year project.   A few years ago, if anyone had said that a four mile stretch of road would make such a different to jobs and travelling to work; no one would have believed you.  But this road has brought holiday- makers closer to our airport; residents closer to jobs; and brought jobs to Doncaster’s doorstep.  The Great Yorkshire Way is a great asset to our borough.”

Lee Tinkler, Operations Director North, Tarmac, said:  “The collaboration and dedication shown by the whole team delivering the second phase of Great Yorkshire Way has been fantastic and meant that challenges faced along the way, some of them unprecedented, have been overcome to successfully deliver the project on time and within budget.

“Tarmac is extremely proud to have played our part in delivering this economically important infrastructure project which is supporting local and regional growth and creating jobs for local people. We look forward to continuing our relationship with Doncaster Council to deliver future schemes in the area.”

Nigel Morley from Mott MacDonald said: “We congratulate Doncaster Council on the completion of this prestigious project for the Sheffield City Region. Mott MacDonald is proud to have played a significant role in the design and management of both phases of Great Yorkshire Way and we are delighted to see the developments at Doncaster Sheffield Airport and Rossington iPort prosper as a direct result.”

Sir Gary Verity, Chief Executive of Welcome to Yorkshire, said: “Seeing the opening of this significant stretch of road is a huge boost for Doncaster, and for Yorkshire as a whole. The benefits it will bring to the county are numerous and it was a privilege to be able to showcase it during this year’s Tour de Yorkshire.

“The Yorkshire Gateway is already regarded as one of the county’s landmark sculptures and the road itself will support the growth of Doncaster Sheffield Airport and improve tourism links for many decades to come.”

The £56 million first phase of Great Yorkshire Way opened on 29 February 2016. It provided a new three mile link from Junction 3 to the A638 Bawtry Road and since opening has been used for almost 14 million journeys. It was funded with contributions from Peel Group, Harworth Group, Verdion, Doncaster Council and the Regional Growth Fund. Doncaster Chamber has been a big supporter of the scheme too.

This helped DSA to enjoy its best year of business since opening in 2005.  Verdion’s £500million iPort has seen high quality space taken by Amazon, Ceva, Fellowes and Lidl and has also opened its new rail freight interchange – iPort Rail. Housing sites are being developed by the Harworth Group in Rossington and by Peel in Auckley.

Removing barriers, creating an environment for growth and improving connectivity for the benefit of residents and businesses were the project’s main objectives. Together with the improvement of White Rose Way, this has been achieved across the town strengthening many existing and new developments. Lakeside continues to flourish boosted by the award winning National College for High Speed Rail and there is great access for over 100 businesses located at Aero Centre Yorkshire, the airport’s 1,600 acre site. Similarly, these improvements enable visitors to continue to enjoy Doncaster’s vibrant variety of tourist destinations including the racecourse and Yorkshire Wildlife Park as well as supporting future attractions like the European Tour Golf Complex at Rossington Hall.

An iconic nine metre high Yorkshire Gateway sculpture was installed in April to celebrate the achievements of the link road. It featured in the Tour de Yorkshire coverage which followed the world’s elite cyclists racing along the new one mile stretch of road.

Funding has come from the Local Growth Fund (LGF), which is Government funding awarded to Local Enterprise Partnerships (LEPs) for projects that benefit the local area and economy.

Tarmac was the main contractor for the scheme designed by Mott MacDonald and the council’s strategic infrastructure team.

Great Yorkshire Way is a central part of the Sheffield City Region Growth Plan which aims to stimulate economic growth and create 70,000 jobs over the next 10 years.