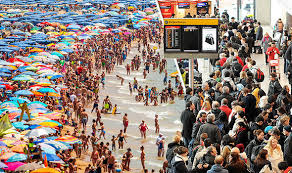 Greece is prepared for another bumper year and expecting a record number of tourists. For every one of its citizens, three foreign visitors – 32 million in total – are anticipated to arrive this year.

It’s no doubt an extraordinary feat for a country that has battled with bankruptcy, at times better known for its protests and riots and only three years ago, narrowly escaped euro ejection. Tourism is the key industry that has helped keep catastrophe at bay.

Tourist numbers in Greece have increased by an additional two million every year for the past three years. Arrivals from China alone have doubled since 2017. However, with record numbers predicted over the next decade, tourism experts are concerned: Can Greece really cope with this?

Prominent environmentalist Nikos Chrysogelos says: “We can’t keep having more and more tourists.” He says he now shudders at the prospect of record numbers of arrivals. “We can’t have small islands, with small communities, hosting 1 million tourists over a few months. There’s a danger of the infrastructure not being prepared, of it all becoming a huge boomerang if we only focus on numbers and don’t look at developing a more sustainable model of tourism.”

A growing number of tourists are from the newly wealthy Asian middle classes, and many are flocking to Greece for getting married or renewing vows against its backdrop of famous orange skies, white chalk houses and the volcanic sea-filled crater.

The increase is making many local officials speak of tourism as more of a curse than a blessing.

“It’s a radical rise and we are forever playing catch-up,” Zorzos lamented, rattling off the figures. “We have built numerous desalination plants and are in the process of erecting the biggest one in Greece, but in five years’ time I worry even that won’t be enough.”
Greece’s growing appeal as a global destination comes despite the revival in popularity of Turkey, Egypt and other regional neighbours who were badly hit by security concerns before.

The necessity to survive has made the sector more inventive. On the remotest of islands, boutique hotels and have begun to appear.