In Greece, tourism-related tax will be reduced 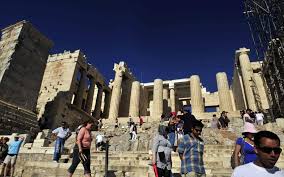 In its bid to boost up competitiveness of Greek tourism product, the drop in the value-added tax and an evaluation of the so-called “stayover” levy are a strategic priority for the new government. As per the action plan offered by Prime Minister Kyriakos Mitsotakis on Wednesday to his ministers at their first cabinet meeting in Athens, the Tourism Ministry’s priorities lie in “strong growth with more investments and new and better jobs”.

The major concerns listed for tourism comprise an immediate cut to the VAT rate for the entire tourism package from 24 percent to 13 percent, with a final target of 11 percent, the evaluation of the stayover tax, the speeding up of all mature investment plans related to tourism accommodation and incentives for energy upgrades to tourism units.

Other intentions revolve around the modernization of the structure and operation of the Greek National Tourism Organization (GNTO), collaboration with the private sector for more effectual promotion of the profile of the country, emphasizing alternative forms of tourism (health, conference, city breaks, cultural tourism, etc) and the attraction of pensioners from fellow European Union states, following the example of Portugal, Malta and Cyprus.