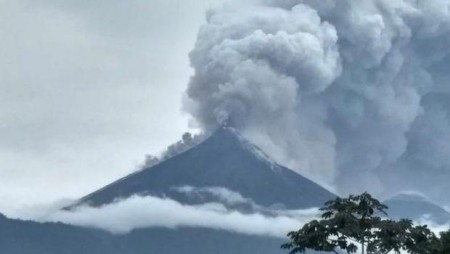 At least 25 people were killed including three children and hundreds others were injured when Guatemala’s Fuego volcano erupted violently on Sunday.
One of the most active volcanoes of Central America, Volcan de Fuego spewed a red hot lava, belching out a thick plume of black smoke and ash that rained onto the capital and other regions.
The charred bodies of victims lay on the steaming remains of a pyroclastic flow as rescuers attended to badly injured victims.
It is a river of lava that had overflowed its banks and impacted the Rodeo village. Sergio Cabanas who is the general secretary of Guatemala’s Conred disaster agency mentioned on radio that there have been injured, burned and dead people.
The disaster agency of Guatemala said that 3,100 people had evacuated communities residing nearby and the eruption was taking toll on an area with a populace of nearly 1.7 million people.
Officials said that about 300 people have been injured owing to this natural calamity.
Shelters have been established for people compelled to flee. A woman covered in ash elaborated an account of how the lava had poured through corn fields and she feared more people had died.
A British tourist said that he felt ‘fortunate’ to have been able to escape harm after ascending the neighbouring peak the day before.
Richard Fitz-Hugh, a backpacker from Beaconsfield, Buckinghamshire, spoke to the Press Association from ash-covered Antigua, around 11 miles from the erupting volcano.
The 24-year-old trekked to the base camp of Acatenango, which lies around two miles from the deadly Volcan de Fuego, on Saturday.
Steaming lava flowed down the streets of the village of El Rodeo as emergency crews entered homes in search of trapped residents, a video on a different local media outlet showed.
The sudden eruption forced the Guatemala City’s La Aurora international airport to shut down its only runway due to the presence of volcanic ash and to guarantee passenger and aircraft safety, Guatemala’s civil aviation authority mentioned in a microblogging site.