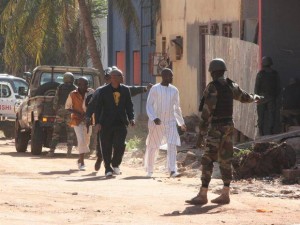 The Central Mali, the landlocked country in West Africa had experienced the gunmen attack where 2 people were killed.

There are five men approached the entrance to the Hotel la Falaise on foot at around 9.30 p.m. (2130 GMT) and opened fire.

Bocar Karambe, the driver said these gunmen were walking calmly and seemed normal.

Once they arrived in front of the gate, the common heard the gunfire.  At least three people, a soldier guarding the entrance and two hotel workers, were struck by bullets. The soldier later died, Karambe and a second witness said. One attacker was also killed.

The Hotel la Falaise was once popular with tourists visiting the Dogon people, who inhabit the cliffs of Mali’s central plateau. However, the tourism industry of Mali dried up after Islamist groups, some with links to al Qaeda, seized Mali’s desert north in 2012.

They were driven back by a French-led military intervention a year later, but attacks remain frequent.