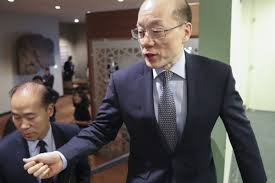 On Sunday, Oct. 20th, Kuomintang presidential candidate Han Kuo-yu (韓國瑜) vowed that by 2028, he would grow the number of foreign tourists to Taiwan to 20 million by establishing closer ties with Communist China.

On Sunday, while attending a press conference, Han asserted that by the end of his second term in office in 2028, he will have drawn 20 million tourists, by that time accounting for more than 8 percent of the GDP of Taiwan, reported ET today. The erstwhile Premier, Simon Chang (張善政), who leads Han’s national policy advisory team and was present in the press event, explained that the first aim would be to double the percentage contributed to Taiwan’s GDP by tourism from 4.4 percent to nearly 9 percent.

Chang observed that tourism makes up 10 percent of the average GDP of the country worldwide. Chang stated that the main target for 2024, the end of Han’s first term if he becomes the president, would be 15 million tourists, according to the report.

Han’s advisor explained that President Tsai Ing-wen’s (蔡英文) administration will soon proclaim its main aim of having 20 million international tourists visit Taiwan by 2030. Chang bragged that by 2028, the end of Han’s second hypothetical term, that number would be 20 million, two years earlier than Tsai’s plan.

Han stated that since Tsai has taken office, the Chinese tourist number has dropped from about 4.2 million in 2016 to 2.7 million in 2018. Han commented that in the first year of Tsai’s tenure, about 3,000 inactive tourists buses were put on the auction block, and almost 100 hoteliers lost their businesses.

Also, Chang said that the Han administration would introduced large-scale infrastructure projects at airports and ports as well, will expand the scale of the tourism development fund, and double the tourism budget to NT$10 billion within three years, reported ETtoday.