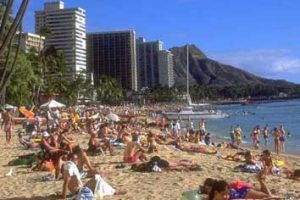 Hawaii, one of the popular destination in U.S. has welcomed a record 9.9 million tourists in 2018 just 45,452 visitors shy of a 10 million benchmark that had been anticipated before headwinds emerged in the back half of last year.

It was another year of record-setting arrivals for Hawaii’s visitor industry, which has realized growth over the last seven years. While the total spending results were higher than last year, the Hawaii Tourism Authority (HTA) does not adjust its spending to account for inflation or include supplemental business expenditures.

The Hawaii Tourism Authority (HTA) has released preliminary numbers this morning showing that 2018 arrivals increased nearly 6 percent from the 2017 arrivals record of more than 9.4 million visitors. This gain got an assist from a more than 8 percent increase in trans-Pacific air seats, which rose to more than 13.2 million in 2018. The total visitor days rose more than 5 percent in 2018 — bringing the average to 242,629 tourists, on any given day, visiting the Hawaiian Islands.

The nominal visitor spending in Hawaii in the year 2018 rose nearly 7 percent to more than $17.8 billion, generating $2.08 billion in state tax revenue in 2018. Spending rose in Hawaiian Islands in all major markets, including the U.S. West, U.S. East, Japan, Canada, and the category called all other international markets, which includes all international markets outside of Japan and Canada. Japan was the only major tourism markets to post a slight year-over-year decline in arrivals.

Oahu, Maui and Kauai all realized spending and arrivals increases in 2018; however, Hawaii island, which suffered for months from a heightened eruption period at Kilauea volcano, experienced flattening visitor spending and declining arrivals.

The year-end results were achieved despite some softening in pockets of the market, which since April had experienced flooding, increased volcanic activities, weather disasters in Hawaii and Japan, and the longest Hawaii hotel strike in recent history, which ran from October to late November on Oahu and Maui. In the month of December, the visitor arrivals rose more than 3 percent to 910,060; however, spending declined nearly 4 percent to $1.6 billion.

Chris Tatum, HTA president and CEO, told the Hawaii tourism board that there are some concerns about forward pace, especially on Hawaii island.