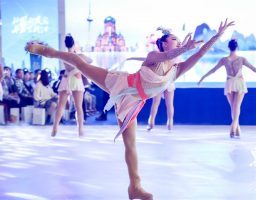 Northeast China’s Heilongjiang Province, popular for its winter activities, is going to launch a variety of snow and ice tourism events this season to highlight itself as a winter travel destination, the province’s cultural and tourism authorities have announced in Shanghai over the weekend.

The 170-day Heilongjiang Skiing Festival is going to be held in Yabuli from December 1. First started in 1998, the festival is going to have 20 activities and games, such as snowfield soccer and an ice and snow photo competition.

Former Olympic champion skater Yang Yang, a native of Heilongjiang has been promoting the beauty of the province.

An ice dancing routine has been the attraction of Shanghai audiences during the event. The show has become a cultural and tourism mainstay of the province.

Stunning winter scenery and top-notch ski resorts add to the beauty of the province. The Wudalianchi Scenic Area showcases the world’s most complete and well-preserved volcanic landforms. In Mohe County, the most northern place in China, the northern lights can sometimes be seen.