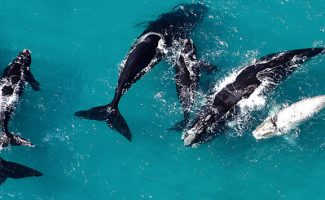 Hervey Bay and Bluff have been accorded the World Whale Heritage Site status.

The World Cetacean Alliance awarded the accreditation to Australia’s Hervey Bay and South Africa’s Bluff in recognition of the responsible and sustainable whale watching practices in their regions respectively.

Hervey Bay and Bluff have been found as genuine stopovers for whales as they come and spend a couple of weeks relaxing in the regions.

Only those places are granted Whale Heritage Site status where cetaceans (whales, dolphins and porpoises) are celebrated through, art, education, research and cultural events; where sustainable practices are improved to ensure the health of cetacean habitats and the long-term economic health of human communities; and where respectful co-existence with cetaceans is supported through policy, law and cooperation.

According to WCA’s founding partner Clive Martin, the award is special because it is in recognition of respecting the native communities as well as adopting practices that support environmental, social and economical sustainability, celebrating cetaceans through events and involving the local community.

The award is also being considered as a major marketing opportunity for both the nations (Hervey Bay and Bluff) so far as tourism promotion is concerned.

Whale watching attracts around 60,000 people to Hervey Bay, injecting $11 million each year into the economy. The council and tourism bodies of Hervey Bay had been working on the application for over four years.

A platform was created for the public on which they can upload photos of whales spotted out at sea, which was later identified by experts. The aim was to conduct a census to get a better understanding of the potential growth of the whale population and their distribution, and behaviour patterns.