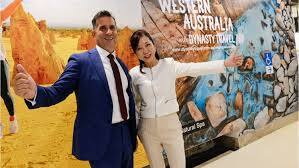 Tourism Minister Paul Papalia launched the campaign in Singapore and travelled to Serangoon Station this morning on the WA-themed train, speaking to commuters about what WA offered as a holiday destination.

The campaign is part of an agreement between the State Government, through Tourism Western Australia, and leading Singapore travel agency, Dynasty Travel, to sell competitively priced itineraries from Singapore to Perth, the Coral Coast and the South-West, booked through Dynasty Travel.

Nature’s Window in Kalbarri; kangaroos on the beach at Lucky Bay, Esperance; and the wildflowers of Coalseam Conservation Park are all showcased in the marketing, along with insta-famous images such as Rottnest’s quokkas, the Hutt Lagoon (Pink Lake) of the Coral Coast region and Crawley’s blue boat shed on the edge of Perth’s Swan River.

Close to one million commuters use the MRT line daily, while Serangoon Station services the nex shopping mall; the largest in north-east Singapore.

As part of the agreement, Dynasty Travel will also promote Perth and WA as a highlight destination at their annual Thanksgiving travel fair in July. The fair attracts thousands of potential holiday-makers and is held in one of the biggest shopping malls in Singapore; Suntec City.

Singapore is considered a key international market for Tourism WA. In 2018, 82,500 leisure visitors from Singapore spent $143.7 million in Western Australia.

It is hoped the combined campaign activity in Singapore will generate more than 11,000 visitors, providing a further boost to the WA economy to help create new jobs.