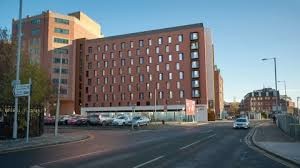 Hilton, one of the leading brands in global hotel industry has added Ireland to its list of Hampton by Hilton hotel destinations.

Hilton has opened the 178-room Hampton by Hilton Belfast City Centre. The £12-million construction project by this hotel operator which is owned and operated by Andras Hotels, began in September 2016.

The new Hampton is part of Andras Hotels’ £25-million investment in Belfast through three hotel projects. These three hotels will add 270 guestrooms to the city’s inventory. “We’re excited at bringing Hampton by Hilton to Ireland.

It sees Belfast as a key market and they are delighted to be placing their flag on the great city.

Rajesh Rana, director of Andras Hotels told that this hotel will sever the strong and growing mid-market range for both the business and leisure traveler and will give another significant boost to the tourism offer. Visit Belfast and Tourism NI have been hugely supportive as they recognize the importance of well known and loved brands opening in the city.

The Hampton by Hilton brand now has a total of 28 hotels across the UK. The new Hampton by Hilton in Belfast opened just a week after the 304-room Grand Central Hotel and the 188-room AC Hotel at Belfast’s City Quays began operating. The 110-room Maldron Belfast City opened a few weeks before in March, according to Belfast Live, while the 55-room Flint hotel in Belfast is slated to open June 29, 2018, according to The Caterer.