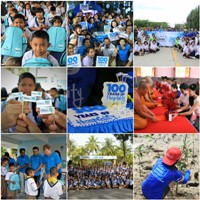 Hilton, one of the fastest-growing hospitality companies in the world, has celebrated its 100th anniversary last May 31, 2019.

Following in the footsteps of founder Conrad Hilton, Hilton Phuket Arcadia Resort & Spa celebrated the company’s centennial milestone by engaging with the community through a series of week-long activities from May 27th to 31st.

Last May 27th, 100 offerings have been given by Hilton Phuket Team Members to 9 different temples across Phuket.

Last May 29th, Primary school students at Watsuwankiriket School in Karon were given school bags and some sweet treats by Hilton Phuket’s team members.

Last May 30th, Hilton Phuket had “Run with 100 Hearts”- a fun run for team members, which took place within the resort grounds. After the run, a lucky draw was conducted for participants as well.

Last May 31st, The Hilton Phuket team participated in a simultaneous cake-cutting moment together with 39 other Hilton Hotels across Southeast Asia.

Hilton Phuket’s first 100 guests to arrive last May 31st were also given surprises by taking lucky picks from a fishbowl. Among the giveaways included were a free spa voucher, free dining voucher, room upgrades, dining discounts, and spa discounts.