Hiroshima is marking the 74th anniversary of its atomic bombing by the United States on Tuesday, with the city’s Mayor Kazumi Matsui putting pressure on the Japanese government to join a U.N. treaty banning nuclear weapons in his peace declaration speech. Attended by some 50,000 people and representatives from about 90 countries including the United States, Russia and Britain, the annual ceremony took place at the Peace Memorial Park near Ground Zero.

Despite occasional heavy rain due to a typhoon, the local people of all ages and tourists visited the Hiroshima Memorial Park from early morning to pay tribute to those who died in the bombing and wish for peace.

But Prime Minister Shinzo Abe declined to accept the request, saying the treaty does not reflect the reality of security. Japan has refused to participate in the treaty, along with other countries under the U.S. nuclear umbrella, as have the world’s nuclear-weapon states.

For the past two years, Matsui had stopped short of explicitly demanding that Japan join the treaty, citing his wish to not make political capital from the peace declaration. The treaty is not yet in force since it has not been ratified by the required 50 states. 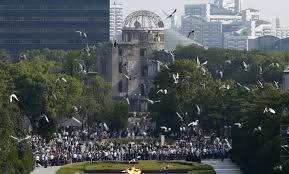 The efforts to abolish nuclear weapons have been increasingly complicated by developments surrounding nuclear powers. This year’s anniversary came after the United States on Friday formally withdrew from the Intermediate-Range Nuclear Forces Treaty, a major nuclear arms control pact with Russia signed in 1987, raising fears of a new arms race. The move, combined with other pressing issues such as Iran’s nuclear activity and the denuclearization of North Korea, could add to global uncertainty before governments review the Nuclear Non-Proliferation Treaty, the keystone of the international nuclear disarmament regime, next spring.

“Around the world today,” Matsui said, “we see self-centered nationalism in ascendance, tensions heightened by international exclusivity and rivalry, with nuclear disarmament at a standstill. “The power of individuals is weak, he said, but added there have been many examples of collective strength achieving desired goals.