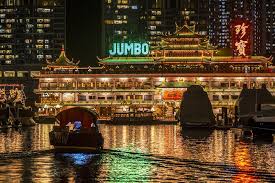 Ho Siu-ying, 76 years old, who has been directing her tire-ringed, wooden sampan to Hong Kong’s well-known Jumbo Floating Restaurant in Aberdeen harbor for 35 years, has never witnessed tough times. Usually, ferrying diners back and forth nets her $13 to $26 for one day work—good to live in a modest way in public housing with her daughter and even indulge in leisure trips occasionally to the Chinese mainland. However with a major decline in tourism due to seven months of civil unrest, she frequently goes home empty-handed. “A lot of days I’m working for no pay,” she says, bending back to let out a cheerful laugh with wrinkles that creases and conceals her concern, which she shares in a quieter voice. “I’m honestly very worried right now because I’m using up my savings.”

Jumbo—whose red and gold, Ming Dynasty-styled exterior has been shown in several movies and appreciated by notables including Tom Cruise and Queen Elizabeth II—dismissed in early January about 60 employees, or half of its staff members. The restaurant has cut back its hours and is now closed on Mondays.

Across Hong Kong, various restaurants, retail stores, and hotels are shutting down, shortening their hours, and dismissing employees. Everyone—from senior government officials to labor unions to business owners are fighting hard to make rent and payroll, hoping for a worse situation, mainly after three days of public holidays to mark the Lunar New Year, which begins on Jan. 25.