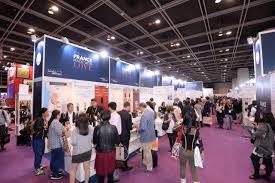 With a record number in attendance, the 11th edition of the Hong Kong International Wine & Spirits Fair came to an end on November 10, 2018.

The fair, arranged by the Hong Kong Trade Development Council or HKTDC was organized from 8-10 Nov at the Hong Kong Convention and Exhibition Centre (HKCEC) with a total of 1,075 exhibitors from 33 countries and regions representing the best wines, spirits and related products across the globe.

Almost 19,000 trade buyers from 73 countries and regions took part in the three-day fair. There was a major rise in attendance from many important markets, including Japan, Singapore, New Zealand, and Russia, as more than 24,000 public visitors aged 18 and above had the chance to taste and purchase wines at the Public Day on Saturday.

To quote Benjamin Chau, Deputy Executive Director of the HKTDC, “The 11th edition of the Wine & Spirits Fair saw exhibitors offering a wider array of wine and spirits for buyers from around the world. This year we saw exhibitors promoting a greater variety of drinks than ever before, including spirits such as whiskies, gins, and rums from Peru, Mauritius and Finland, as well as sakes and fruit wines from Japan and baijius and yellow wines from the Chinese mainland.”

In Hong Kong, whiskies have experienced a major rise in popularity in recent years. Attention has been majorly targeted on the famous brands from Scotland and Japan. However, the willingness of people to try whiskies from other production areas and smaller-scale brands emphasizes the fact that the market is maturing with time. This year, exhibitors presented whiskies from many regions, including Scotland, Japan, Taiwan, the United States, France, and the Czech Republic.