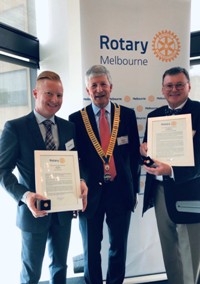 Jason Balkin has been awarded the honorary Paul Harris Fellow Recognition by the Rotary Club of Melbourne. He is the Associate Director Business Development and Bids at Melbourne Convention Bureau (MCB).

The accolade usually reserved for Rotarians, was awarded to Jason for his outstanding contribution in helping to secure the 2023 Rotary International Convention for Melbourne.

The presentation of the Paul Harris Fellow Recognition is the greatest honour Rotarians can confer on a member of the community.

It is Rotary’s way of saying thank you to someone who has made a significant contribution to the community.

“I am very proud to receive a Paul Harris Fellowship from the Rotary Club of Melbourne. It has been an honour to work with such an inspirational group of people over the past three years to secure the 2023 International Convention for Melbourne.

“This event will not only deliver significant international visitation to Melbourne but also have a genuine positive impact on the local community,” said Mr Balkin.

“It has taken several years of hard work, involving two rounds of submissions with Melbourne amongst 13 cities submitting competitive bids, and eventually shortlisted down to a final bid between Melbourne and London. Our persistence paid off.

“Jason went above and beyond to demonstrate Melbourne’s capability and ability to meet stringent bid regulations, and strategically demonstrate   our ability to accommodate the specific needs of Rotary delegates and the Convention format.

“Jason continues to give of his personal and professional time, talents and energy in supporting Rotary. It is his enthusiasm, energy, vitality and strategic approach that makes him an achiever and it has given me great pleasure to recognise Jason as a Paul Harris Fellow,” said Mr Fisher.

The 2023 Rotary International Convention is the most valuable conference ever won for the state of Victoria, expected to attract 20,000 Rotary members from over 200 countries and regions worldwide and injecting over $88 million into the Victorian economy.

The bid led by Melbourne Convention Bureau (MCB) and supported by the Victorian and Australian Governments had stiff international competition, which makes it even more prestigious for Rotary to select Melbourne.

The successful bid win was made possible by the unified approach with partners, with acknowledgement to the engagement of the local Rotary members and collaborative Team Melbourne determination.

Paul Harris was the founder of Rotary in Chicago in 1905 and the recognition perpetuates his memory in the most appropriate manner possible.