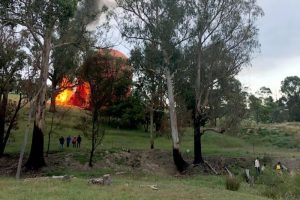 A hot air balloon carrying  16 people onboard has caught fire and landed in a paddock in Victoria’s most popular tourism destination, Yarra Valley.

A 27-year-old woman was taken to Maroondah hospital for observation after the balloon landed near Cahillton Road, Gruyere, about 6.15am.

An Ambulance Victoria spokeswoman said the woman had suffered minor injuries and was in a stable condition. No one else was injured.

The commercial flight was carrying a pilot and 15 passengers when it took off shortly after 5.30am from Wandin Park, according to a statement by the National Commercial Ballooning industry. It landed an hour later after the onboard fire.

After the landing, the basket was destroyed by fire. The Country Fire Authority crews were in attendance.

The Air Transport Safety Bureau is investigating. The fire follows another mishap on Friday when a hot air balloon carrying three newly engaged couples crashed into a tree in Eltham North. The basket and balloon had to be cut free by firefighters using chainsaws.

There are about 250,000 people participated in hot air balloon rides each year in Australia and hot air ballooning remained one of the safest modes of aviation. Mr Crock said the pilot was one of Australia’s most experienced commercial hot air balloon pilots with approximately 5,500 hours in command.