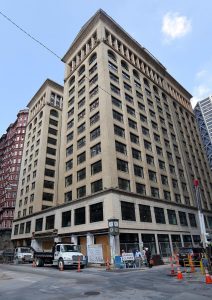 After a three-year effort from Restoration St. Louis, Hotel St. Louis opens in historic Union Trust building downtown. The 14-story Union Trust at 705 Olive Street, designed by famed architect Louis Sullivan, had been vacant since 2013. Amy and Amrit Gill of Restoration St. Louis bought the 1893 structure in 2015 for U.S. dollars 3.3 million.  It spent U.S. dollars 64.7 million for the renovation.

Matt Birkenmeier of the late Quincy Street Bistro serves as the chef of Hotel St. Louis.

The 140-room hotel is accepting bookings. The hotel operates under the Autograph Collection Hotels by Marriott. Each room has a vintage record player and several albums with a St. Louis connection.  The hotel’s rooftop bar will open early next year.

The hotel also includes 14 luxury apartments and a three-bedroom penthouse.

St. Louis Board of Aldermen provided the project received 20 years of property tax abatement with the last 10 years worth 50 percent of the value of improvements.

Amy Gill says that the hotel will help reflect what beauty St. Louis is.

She said: “We’re thrilled that we can be part of this vibrant renaissance occurring all around us, made all the more meaningful with the partnerships we’ve fostered with local businesses in terms of providing them a platform for visibility for their products at the hotel — and, really, what better way to unveil to the world, what a gem St. Louis truly is”