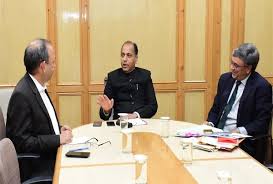 In a bid to give that lift to tourism, Rs. 480 crores would be invested behind the development of infrastructure in remote and lesser known tourist places of Himachal Pradesh under the Asian Development Bank (ADB) Tranche-II project worth Rs. 1892.04 crores, Chief Minister Jai Ram Thakur mentioned this on Tuesday.

While supervising over the review meeting of Tourism and Civil Aviation Department here, the Chief Minister stated that in the first phase, Rs. 800 crores have been proposed to be utilized under this project on different activities that would develop tourism.

Thakur said around Rs. 180 crores have been planned to be spent on town beautification like Nahan, Solan, Palampur, Dalhousie, Una, Keylong, Tabo and Kaza. Under this project, around Rs. 45 crore would be spent on conservation and maintenance of different heritage buildings and Rs. 50 crores on capacity building.

He explained that under the new scheme Nai Raahein, Nai Manjilen, the state government has chosen Janjehli in Mandi district, Chanshal in Shimla district, Bir Billing in Kangra district and Larji to be developed from tourism point of view.

Thakur also mentioned that food park and parking facilities would simultaneously be developed on both sides of the Rohtang tunnel to help the tourists as well as local people.

“The state government is committed to establish maximum number of ropeways in the state for the convenience of tourists,” he said, adding that building has been accelerated on Dharamshala-Mcloedganj ropeway coming up at a cost of Rs. 150 crore and it would be completed by May next year.