Huge hailstones rained down on Timaru 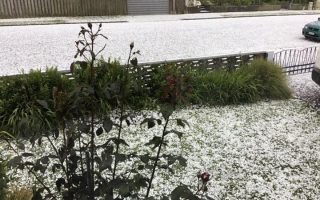 Timaru has been pelted by huge hailstones and there is a possibility of a tornado as well as a severe thunderstorm makes its way over Canterbury.

As per Timaru residents, hailstones were as big as golf balls, which have covered the roads and caused damage to some buildings.

Meanwhile, the Met Service has issued a severe thunderstorm warning for the area while cautioning that it is moving towards the northeast.

If Met Service is to be believed, the tornado will be so strong that it will blow out windows and lift roofs and break large branches off trees apart from generating dangerous flying debris and blowing vehicles off the road.

There is a possibility of tornadoes and golf-ball-sized hail for the South Island’s east coast.

People have been advised to take shelter if severe weather approaches.

Earlier today MetService ruled out the possibility of a tornado, but also said that it was difficult to predict tornadoes in New Zealand compared to the United States because tornadoes here were a lot smaller and chances were very less that it appeared on rain radars.

Fire and Emergency services have responded to over 30 call outs from the damaging hailstorm in Timaru and Ashburton.

As a result of hailstones, the Timaru Savemart store lost 18 skylights. Earlier SaveMart’s store in Christchurch also lost part of its roof due to a tornado two days ago.