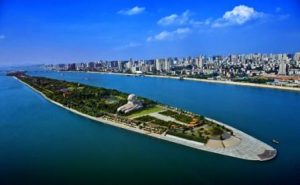 London’s spectacular Landmark Hotel provided the setting for a highly-successful presentation recently delivered by a visiting VIP delegation from the Hunan Department of Culture and Tourism, attended by the China National Tourist Office in London and representatives from VisitBritain and the British Council, as well as an audience of well over a hundred appreciative UK travel industry operators and media representatives.

Mr. Xu Dazhe, Governor of Hunan Province, accompanied by Ms. Chen Wen, Minister and First Staff Member at the Chinese Embassy in London, began by explaining that Hunan Province, home of Chairman Mao Zedong, the founder of New China, and with a population of over 73 million, is about the same size as Great Britain and straddles the eastern, central and western regions of mainland China.

The  delegates learned that Hunan is famous for its astonishing scenery, especially the surreal and other-worldly beauty of Zhangjiajie with it stunning ‘quartzite forest’ and sandstone peaks, the spectacular ruins of Laosi Town in Yongshun County – a UNESCO World Cultural Heritage Site – the ancient town and villages of Fenghuang and the unique ethnic cultures and traditions of the Dong, Miao and Tujia people.

The remarkable connectivity between China’s ancient and modern cultures is also very much on display in Changsha, the centuries old capital of Hunan Province, which is now one of China’s cutting-edge megacities and a major global transport hub.

The delegation then proudly announced that the ‘deep integration’ of Hunan’s unique culture and its world class tourism infrastructure has led to it being the only province in China to be included in Lonely Planet’s “Top Ten Travel Places in the World”, and it being the only Chinese province to be listed in the magazine’s top ten “best value destinations” for 2018.

VisitBritain’s Policy and Public Affairs Manager, Timothy Jenkins, then spoke about the importance of China as a source market for the UK’s travel industry, saying, ”VisitBritain forecasts that, in 2019, Chinese visitors to the UK will be spending a little over £1 billion in our country, putting China well within our top ten most valuable inbound markets.”

The event then concluded with the signing of a partnership between between Hunan Museum and the British Museum for the establishment of a cooperation and cultural exchange programme, and an invitation from the Governor of Hunan Province for British visitors to “come to Hunan to enjoy the mountains, rivers and scenery and history of our beautiful province.”

Further information and travel industry support for tour operators and travel companies interested in Hunan can be obtained from event organisers, the Bristol based Anglo-Chinese marketing company ‘Has To Be China.’