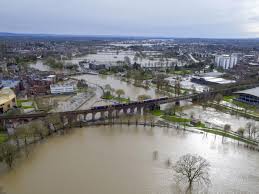 The residents of Snaith in East Yorkshire are being forced to abandon their homes after the River Aire burst its banks following three weeks of heavy rain. Humberside Police said on social media that River Aire devastated the banks at Snaith. Now homes are now being evacuated, those affected can attend the Priory Church for shelter and refreshments. Humberside Police also said to avoid  the area, the A1041 north of Snaith is closed in both directions.

The social media users posted footage of water pouring over flood banks in the Snaith and Gowdall area into surrounding wash lands.

The lower River Aire has been causing concern since the weekend with a handful of homes reported to be flooded in nearby Hirst Courtney, on the opposite side of the waterway to Snaith.