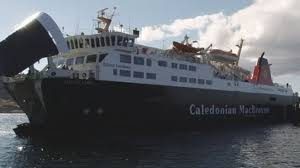 Hundreds of travellers to Arran have found it difficult to make it back to the mainland after CalMac ferry services were stopped.

CalMac said high winds and a heavy swell meant ferries were unable to dock at Ardrossan and another route, with less capacity, had to be used.

CalMac said it managed to get 154 out of 217 cars off the island on Sunday.

Locals said it highlighted problems with ageing ferries and the facilities at Ardrossan harbour.

The cancellations on the Brodick/Ardrossan route on Sunday meant those heading for the mainland had to use the smaller ferry at Lochranza, which can only cope with 23 cars at a time, to travel to Argyll.

Queues built up, with some travellers who did manage to get a sailing facing waits of four hours or more before they could board.

Ferry sailings from Brodick were also cancelled on Monday morning but CalMac said it expected to resume the service at 13:55

Gavin Fulton, chairman of the Arran Ferry Action Group, said people on Arran were living with disruption “almost every week”.

Speaking during a media programme Gavin said: “We absolutely accept that there will be days in the year when the ferry won’t sail, but the situation in the past was the boat sailed to Ardrossan on a regular basis and when the weather was bad the boat sailed to Gourock.
“Although we would get less sailings in a day, we still had a secure link to the mainland.

Some years ago the boat stopped sailing to Gourock and there has been no credible explanation as to why it does not sail to Gourock now.”

A modern replacement ferry for the Arran route should have been in service by now, but it has been delayed due to problems affecting construction at the Ferguson shipyard in Port Glasgow.

“Obviously new boats are required. The current fleet is very old and prone to a lot of breakdowns, which is making the situation difficult,” Mr Fulton continued.

“There are other problems. Ardrossan is not a good harbour. They are planning to spend £35m altering it for the new ferry which, if it ever arrives, would be going there.

“Would that expenditure solve the situation? They’ve spent £31m at Brodick and the pier is hopelessly compromised. It doesn’t work properly in an easterly wind. So this to me all comes down to incompetence and mismanagement.”

CalMac said there had been weather-related disruption since New Year with gusts of up to 60mph affecting services to Arran and elsewhere.

Director of operations Robert Morrison said: “In such conditions ships’ masters will take a decision on whether it is safe to sail or not based on wind speed and direction, sea swell and tidal conditions combined with their experience of sailing in west coast waters.”

He said extra sailing had been provided since 3 January to clear a backlog of bookings, and that a shuttle service to cope with the latest disruption had managed to clear about half the cars booked to sail.

“Unfortunately, it is a reality of island life that in mid winter there is always a likelihood that some sailings will be cancelled due to adverse weather conditions impacting on passengers ability to travel when they want and we strive to do all we can to manage this effectively,” he added.