Home » IBTM China concludes on a good note, sees a surge in buyers

IBTM China concludes on a good note, sees a surge in buyers 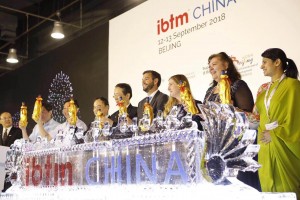 After successful hosting high quality meetings at the China National Convention Centre (CNCC) in Beijing recently concluded that took place from 12-13 September. The tow days of meetings, networking and educational sessions saw more than 300 exhibitors from 20 countries along with more than 280 hosted buyers and around 3,400 visitors.

There were more than 6,600 pre-planned meetings and the exhibitors were from both domestic and international companies. There were more than 500 visitors attending The Knowledge Programme which tapped on several topics across ten key areas which included advances in technology, a study into the associations market in China and the art of selling incentive travel to business leaders.
There was increased focus on bringing corporate event planners to the event in the 13th edition of the event and the organizers stated that there was an increase in the share of buyers from 24% last years to 30% this year.

Hubertus Funke, Executive Vice President & Chief Tourism Officer, San Francisco Travel was happy to participate for the his first time in IBTM China. He said that it was a great opportunity to connect the buyers from across the world.

Kin Fun Michael Chow, Corporate Development and Staff Affairs, Provident Travel Group, Hong Kong said that he had been attending IBTM China for more than 5 years. He appreciated the show arrangement, discovered new regions in China apart from the main hubs. He could also connect with some good suppliers and hotels for the Chinese market.

Nicole Ci, Event Manager, IBTM China, said that there was a lot of learning and buzz on the event floor. Exhibitors and hosted buyers deemed the event to be highly productive. It is important for them to deliver best experiences and take the event forward facilitating the attendees to make valuable connections.