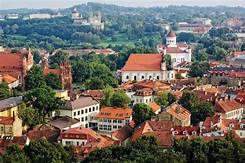 Lithuania’s 30th Independence Anniversary is celebrated by  sixteen restaurants in Vilnius, Lithuania by introducing independence-themed dishes. So the diners in Vilnius will be able to literally taste freedom and the progress Lithuanian cuisine made after its food tradition was neglected for fifty years.

Guests and locals will be able to taste Lithuanian independence as imagined by the best chefs in the city until July 6.

Inga Romanovskienė, the Director of Go Vilnius said that the city was looking for a creative way of sharing this beautiful milestone with guests and locals alike.Knowing that they have a city full of top-level chefs, and that gastronomical experiences are what a lot of travellers seek for when visiting, it only made sense to involve the restaurants.They  were blown away by how co-operative and eager the chefs were to jump on board.

The idea is to create dishes that signify freedom and chefs were expected to interpret freedom crafting dish that would represent their personal idea of being free.

Freedom was related with Independence for some  and some created dishes in yellow, green and red colours showing the colours of the Lithuanian flag.

Local ingredients was chosen by some chefs for their expression of freedom as inherently Lithuanian value.