Indian Railways to install GPS in around 2,700 trains by December 2018 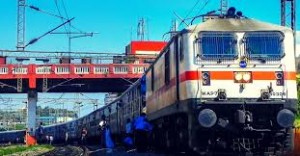 It was stated by Rajen Gohain, Minister of State for Railways in a written reply to the Lok Sabha  that the Railway Ministry and ISRO have collaborated to install Real-Time Train Information System (RTIS) to track trains.

It was reported that Phase-1 of the project would be covering 2,700 locomotives and the expected time of installing GPS devices will be December 2018.

He further added that a a reliable and high-level accuracy of about 99.3% of real-time reporting of arrival and departure timing updates have been observed that will meet up the RTIS requirements.

Real-time GPS information is an excellent tool will help in maintain a tight schedule and avoid delays.

It was noted that trials for this system have already been conducted on the New-Delhi-Guwahati, and New-Delhi-Mumbai Rajdhani trains on six electric locomotives.