Indians among the top group of international visitors to America 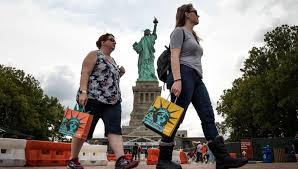 In 2018 a record 1.4 million Indian tourists visited United States turned out to be one of the top groups of international visitors to America.  President Donald Trump’s immigration policies and visa restrictions could not unfaze them.

Christopher Thompson, CEO of Brand USA said that it was a great news as it is related to friends and relatives coming from India.

He explained the reason behind the high visitation from India, it has been one of the strongest markets for visiting friends and relatives . A lot of young students come over for education and their families follow them. So there is a growing community of Indians in the United States.

With every passing year the India US relationship has become stronger and deeper, both of them have a democratic system.

The spending capacity of tourists from India is much more than other countries.In terms of growth rate of spending by foreign tourists after South Korea, India is the best-performing market.

The US Department of Commerce statistics that Indian visitation is projected to grow at an impressive 46 percent between now and 2023.

On an average over the next five years there will be a year over year increase of probably somewhere around six percent.

Thompson said that  he would encourage the Indian travellers to visit other places as well in the US other than traditional gateways.

They should exercise their spirit of adventure and curiosity and use the storytelling platforms and visitors should look at new opportunities and available experiences.