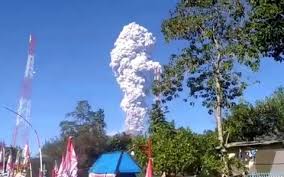 Most active volcano of Indonesia names Merapi erupted recently spewing a large amount of volcanic ash about three miles into the air and triggered a top alert for passenger planes.

And the volcanic ash spread to the west of the crater as per a spokesman of national disaster management agency Sutopo Purwo Nugroho mentioned. He added that the volcanic ash is expected to fall around the western side of Mount Merapi. It said that the wind would be blowing more dominantly on a southwest direction.

Red alert of Vona (Volcano Observatory Notice for Aviation) has been issued.

Then he added that people residing in the vulnerable zone close to the volcano have also been cautioned to be more alert though no evacuation have taken place as yet.

The Volcano Observatory Notice for Aviation (VONA) issued a code red warning alert, which means that a volcanic eruption is underway with significant emission of ash into the atmosphere.

The eruption is thought to be the biggest from Merapi this year.

Merapi’s previous eruption on 24th May had prompted authorities to raise the alert to the third highest level with a no-go zone of 3km in radius from the crater as per the agency. And on 21 May, the centre for volcanology and the geological disaster mitigation raised the alert level of Mount Merapi from normal to cautionary.

The alert came after increased phreatic eruptions, which happen when magma heats up groundwater and vapour is released under pressure.

Authorities have prohibited any activities around a radius of just under two miles from the volcano.

Merapi is located about 28 km north of Yogyakarta city, which has a population of 2.4 million and thousands of people live on the flanks of the volcano.

The volcano, one of Indonesia’s 129 active ones, has regularly erupted since 1948. In November 1994, pyroclastic flow from a large eruption killed 27 people, and another major eruption occurred in 2006.