Insta-Wonders of the World Fly Into Heathrow 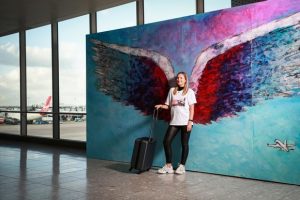 Four of the world’s most Instagrammed pieces of street art have been recreated at Heathrow to provide passengers with the perfect ‘post’ moment when starting their journey at Heathrow.

The artwork aims to make Heathrow the most Instagrammed airport in the world this year and follows research revealing that ‘Instagrammability’ is now one of the biggest motivations for booking a holiday. Almost a third (30 per cent) of holidaymakers seek out holidays with picturesque Insta hotspots, with nearly two in three (60 per cent) finding their travel inspiration from Instagram.

The street art campaign aims to bring the best of British and international culture to the airport, with unique recreations of four pieces of street art from around the globe including Colette Miller’s iconic Wings from Los Angeles, which have been snapped,  shared and liked hundreds of millions of times on Instagram including by famous fans like Halle Berry, Zach Braff and Gerard Butler.

Other recreations include Rogue One’s iconic ‘Floating Taxi’ from Glasgow, Alice Pasquini’s ‘Above the Lines’ from Rome and Odeith’s ‘Anamorphic Frog’ from Lisbon. Each piece of street art measures between 10 and 16 foot and encourages smartphone-photographers to be ‘part of the art’, following research revealing that the majority of users think they generate more ‘likes’ by being ‘in’ an image themselves. Each artwork has been placed in terminals that fly to its original street art location, meaning select passengers can also go and see the original.

Heathrow is currently the second most Instagrammed airport in the world and aims to overtake South Korea’s Incheon International Airport with its street art initiative this year, helping travellers upgrade their plane poses and auto-pilot selfies at the beginning of their journey.

Keeping up appearances on social media has become a major driver for holiday-makers, with the research revealing that the average person will take 25 selfies a day on their travels. Amateur ‘phoneographers’ take an average 463 pictures on each trip and spend 43 minutes a day editing their best shots.

“At a time of phenomenal change and opportunity, Heathrow is the UK’s front door to the world, connecting passengers to the wonder of travel across over 80 countries across the globe. Bringing some of the most Instagrammed street art from around the world into our terminals is our way of showing the accessibility of different cultures and wonders of the world through our airport, as well as giving passengers the perfect post moment to start their journey at Heathrow.”

ABOUT THE STREET ART / ARTISTS

Colette Miller created the Global Angel Wings Project in 2012 on the streets of Los Angeles, the City of Angels. They were painted to remind humanity that we are the angels of this earth. They are human sized interactive public art, wings that let people take photos and become  part  of the artwork. Since the first  pair in LA in 2012, Colette has painted wings around the world including across the USA, Australia, France, Japan, Cuba, Mexico, Kenya and now London.

“I started painting the Wings in 2012 to remind humanity that we are the angels of the earth,” says Colette Miller. “They represent our inner angel, and represent that even though we all come from scarred lives and can sometimes do the wrong thing, we are all human and we can all really be the good on this earth. The Wings can be seen across six continents, but it is the first time I have painted them in London, and it’s special that they are in Heathrow and bringing people from across the world into contact with them in one place.”

Rogue One (real name Bobby McNamara) has work scattered all over Glasgow and there is even a mural trail where all his works can be traced. The Floating Taxi is his most famous and most Instagrammed artwork, depicting a man hailing a taxi floating with balloons on Mitchell Street in Glasgow.

“The original piece of street art depicted a floating taxi held up by balloons. The building I painted the mural on in Glasgow was owned by a lady whose late husband had been a taxi driver, so I wanted this to be the theme and, subconsciously inspired by the movie Up, things went from there.” says Rogue One. “It feels fitting to have been able to recreate it in Heathrow, and it’s an honour to have it there for so many people to see and hopefully appreciate each day.”

3) Alice Pasquini, Above the Lines, Terminal 2

Alice Pasquini’s street art revolves around topics of femininity and independent  women and her murals tell  the stories of acts of kindness and love. ‘Above the Lines’ in Rome depicts three women jumping the height of a building and was painted to help raise funds for the town of Grisciano after it was hit by an earthquake.

“All of my work talks about people and their emotions,” says Alice Pasquini. “I have always used walls like a canvas to represent intimate moments in public space. For Heathrow I wanted to represent a journey that was both real and imaginary. The girl jump through a colourful space that invites passengers to do the same and join the scene. In this way, travel is both something physical and fantastical.”

Specialising in anamorphic graffiti, Portuguese artist Odeith uses perspective and shadow to create his own signature, obscure style that he calls Somber 3D. His Anamorphic Frog, which gives the illusion that is creeping up on you, is one of the most Instagrammed artworks in Lisbon.

“I have always been fascinated by 3D paintings, and when I discovered a way of bringing graffiti and 3D together it opened up my life as an artist,” comments Odeith. “It’s an honour to recreate my work at Heathrow, and I think it’s an amazing way to show the best of the world’s street art to millions of people from all walks of life.”

​The street art will be at Heathrow terminals 2,3,4 and 5 in the departure lounges, after security, until the summer. Follow #Heathrow on Instagram to see the street art.