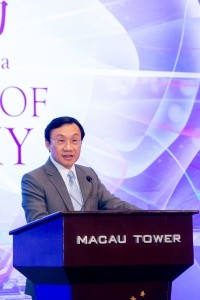 The “International Gastronomy Forum, Macao 2018” opened today (January 18) in a ceremony presided by the Secretary for Social Affairs and Culture of the Macao SAR Government, Alexis Tam, and the Deputy Director-General of UNESCO, Getachew Engida. Organized by the Macao Government Tourism Office, the forum brought to town representatives of 17 UNESCO Creative Cities of Gastronomy to connect with and discuss around the theme of “The Power of Gastronomy” for a sustainable development.

The forum is one of the first highlight activities of the “2018 Macao Year of Gastronomy” launched yesterday (January 17), kicking-off a full range of initiatives locally and internationally to celebrate the designation and forge Macao as a UNESCO Creative City of Gastronomy.

Forum gathers Cities of Gastronomy, academics and professionals in the field
The forum opened this morning at the Macau Tower Convention and Entertainment Center with the Secretary for Social Affairs and Culture of the Macao SAR Government and Chairman of the Application of Macao, China for the UCCN Committee, Alexis Tam, and the Deputy Director-General of UNESCO, Getachew Engida, featuring as the main officiating guests that spoke at the opening of the forum.

Also present at the opening were the Deputy Mayor of Östersund, Sweden, Anders Edvinsson, the Chief of Office of the Secretary for Social Affairs and Culture, Ip Peng Kin, the Director of the Macao Government Tourism Office (MGTO), Maria Helena de Senna Fernandes, the President of the Institute for Tourism Studies (IFT), Fanny Vong, the Director of Division of Sciences, Culture and CI of the National Commission of China for UNESCO, Shen Yubiao, the President of the United Association of Food and Beverage Merchants of Macao, Chan Chak Mo, the Deputy Director of Education and Youth Affairs Bureau, Leong Vai Kei, among others.

Participants of the forum also include representatives  of 17 Creative Cities of Gastronomy from around the world; the China Cuisine Association; members of the Tourism Development Committee; the Committee of Cultural Industries; the Application of Macao, China for the UNESCO Creative Cities Network Committee; local associations academics, professionals in the field, among others, in a total of around 300 people.

At the occasion, the Secretary for Social Affairs and Culture, Alexis Tam, stated that “we hope to create new synergies in the network by bringing in our contribution as a city transforming itself into a world centre of tourism and leisure, and a platform between China and Portuguese-speaking countries in trade and in culture. Macao is also a regional hub with great potentials. By placing Macao in a regional context with major national projects, such as the Belt and Road Initiative and the Guangdong-Hong Kong-Macao Greater Bay Area, we aim at working with our regional partners to recognize creativity and gastronomy as elements of regional innovation strategies.”

The Deputy Director-General of UNESCO, Getachew Engida, remarked that “the designation of Macao as a Creative City of Gastronomy bears witness to its continuing commitment to promoting a culture-centered model of urban development, particularly through its rich culinary traditions and vibrant contemporary gastronomic scene,” highlighting that the International Gastronomy Forum, “with its diverse programme aimed at showcasing the world’s vast culinary heritage, will further foster gastronomy as a means to make cities attractive, inclusive and sustainable for all their inhabitants.”

Presentations and discussions on how to forge ahead as a Creative City of Gastronomy
After the opening ceremony, the forum proceeds with an overview about the network and the vision ahead of UNESCO Creative Cities Network (UCCN) and the Cities of Gastronomy by the coordinator of the Cities of Gastronomy Group, Dag Hartman. Two sessions follow, one of which a case study sharing and discussion between higher education institutions of the Creative Cities of Östersund (Sweden), Jeonju (Korea) and Macao, about The Relationships among Gastronomy, Creativity, Culture and Education. Another one is a Celebrity Chefs Session gathering famous chefs from Spain, Mainland China and Macao to share their success stories and cultural inspirations. The forum closes with a Food and Beverage Industry Leaders Face to Face, bringing together heads from Macao’s integrated resorts and associations to brainstorm about the current situation and opportunities ahead for the local industry.

In tandem with the presentations and discussions today at the forum, representatives of Creative Cities of Gastronomy gathered in Macao are also joining other activities between January 17 and 19. Two internal UNESCO Creative Cities Network meeting sessions are being held to welcome and integrate the new Creative Cities of Gastronomy, as well as for matching members in new partnerships and project initiatives. Other activities include a higher education institutes workshop, site inspections to IFT and Macau University of Science and Technology, along with opportunities to experience the diverse local gastronomic culture.

Organized by MGTO, and first launched in 2016 when Macao was preparing the application to join UCCN, the International Gastronomy Forum aims to be an annual gathering providing a valuable platform for exchange and exploration of collaboration initiatives between Macao, other Creative Cities of Gastronomy, academia and professionals in the field. With the advantage of Macao’s tourism infrastructures, the city’s experience in organizing major events and the attraction of the local east-meets-west cultural heritage, MGTO wants to transform the forum into a new highlight event in the calendar of the network. The forum is one of the major initiatives of Macao’s four-year action plan as a Creative City of Gastronomy, which also includes educational, exchange, cross-field collaborations and other activities.

Macao became the third city in China to join UCCN in the field of Gastronomy on October 31, 2017, after Chengdu and Shunde. UCCN covers seven creative fields: Crafts and Folk Art, Design, Film, Gastronomy, Literature, Music and Media Arts. The Creative Cities Network is currently formed by 180 members from 72 countries, including 26 Cities of Gastronomy. The UNESCO Creative Cities Network was created in 2004 to promote cooperation with and among cities that have identified creativity as a strategic factor for sustainable urban development.