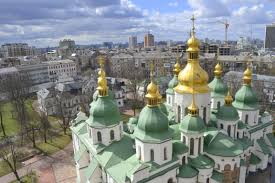 Head of the tourism department at Kiev City Administration Anton Taranenko said that this year Kiev is expected to receive two million foreign tourists compared to 1.8 million visitors in 2013.

At a media briefing, Taranenko said that 850,000 international travelers visited Kiev in January through June, which is 28.8 percent more than in the same period of 2013.
Belarus was the largest source of tourists to Kiev, followed by Israel, the United States, Germany and Turkey.