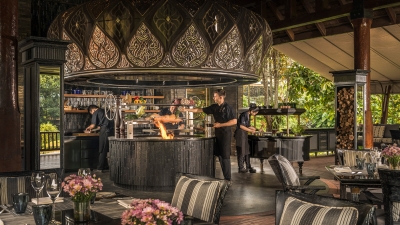 Four Seasons Resort Chiang Mai establishes the vanguard in culinary excellence in Chiang Mai with the launch of Char by Four Seasons, paying homage to the age-old tradition of grilling. Focused on farm-to-table ingredients and premium cuts of meat, more than 60 percent of the ingredients are sourced from local farms in Northern Thailand.

Designed by acclaimed architect and landscape designer Bill Bensley, the beautifully-decorated fire pit is the pièce de résistance of the restaurant. “Seventy percent of our menu is cooked here,” shares Executive Chef Liam Nealon, who has spent the last six months crafting the dining experience. “Our menu explores the relationship between open flame and high-end produce, rendering each ingredient in a new and unique way. We work closely with local farmers so that the freshest, seasonal ingredients of Northern Thailand are brought to the fore.” Each recipe is expertly countered with signature sauces and house marinades that deliver the complexity with a punch.

“We are excited to unveil this stunning new interpretation of a classic concept. Char is a celebration of the grill and fire-pit where clean, crisp flavours are elevated with finesse and flair,” shares Anthony Gill, General Manager, Four Seasons Resort Chiang Mai and Tented Camp Golden Triangle. “Making a strong connection with the local community is an important goal, as sustainability is key to the restaurant’s success.”

Fire Starting at a Young Age

Leading the culinary brigade, Sous Chef Marco Avesani brings a typical Italian flair to the culinary think-tank at Char. Born in Avesa in Verona, Italy Marco would often visit his grandmother in her country house in San Bortolo delle Montagne as a child. “I was in charge of starting a fire in the pit – we did not have heaters in those days. Food was cooked outside most of the time on an open flame – that’s where the inspiration comes from,” he shares.

The lunch experience at Char begins light and refreshing, with a selection of salads and ceviches. Quinoa spaghetti with spirulina seaweed and pesto sans cheese balances off the classic wood-fired pizzas and sandwiches with delicious house-prepared pastrami and striploin steak that favour the grill-concept. A Parisian bistro touch arrives with the steak-frites and its accompanying bone marrow jus, while the organic roast chicken and fresh-off-the-grill seabass carve out a more salubrious sentiment.

Dinner by the Fire

Whether roasted, seared or chargrilled, each dish delivers the magic of a fireside dinner experience. Freshly shucked Coffin Bay oysters and organic figs with goat feta set the stage, even as black-pork ribs and a table-side steak tartare begin the gambit. “Our wood-fired pit delivers signature specialties with a crackle,” smiles Marco. There is an Australian rack-of-lamb, organic chicken, and a wide selection of steaks, headlined by black angus tomahawk. “Look especially for the salt-crusted arctic char, which arrives with a crisp oven-roasted crust!”

Chef’s special repertoire of condiments and dressings is the highlight of the dining experience at Char. “There’s a tangible twist to our special house sauces – srira-char, bacon mustard and pale ale ketchup – created in-house to complement the grilled meats,” says Marco.

Crafted exclusively for Char by Four Seasons Beverage Ambassador Philip Bischoff, the exotic flavours of Northern Thailand burst through the exciting cocktail menu. From smoked rosemary to cherry bark, and even char-grilled pineapples, there’s a tropical twist to every sip.

Pastry Chef Yanisa Wiangnon delivers a fitting finale to this symphony of food with her selection of smoked and flambéed desserts. “Look for some local flavours too,” she says – her fermented sticky rice in the cheesecake is a winning twist! “My recommendations are the ‘chocolate on fire’ and ‘exotic baba’ with Northern Thailand’s famous phu lae pineapple – they won’t disappoint,” she grins.

With a keen focus on sustainability, the restaurant’s menu stays true to its promise of responsible practices. “Many of the vegetables we use including figs, tomatoes and herbs are grown organically in farms just minutes away from our Resort. We have partnered with a local producer of rare grass-fed Thai wagyu, while the farms in Australia have been selected for their sustainable practices,” explains Marco.

“Thailand, especially Chiang Mai, is known for its rich crafts heritage, and we have harnessed these fabulous resources in creating Char,” explains Young Rha, Director of Food and Beverage, “From steak knives to our serving ware, everything is handcrafted right here.”

With open vistas of Mae Rim’s terraced rice-fields and the mountains beyond, Char by Four Seasons sets the stage for the riveting culinary theatre its menu promises.