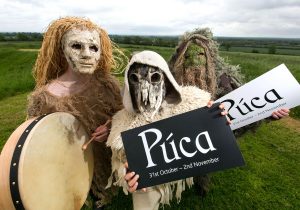 Rooted in ancient tradition and taking place in counties Meath and Louth, the all new Púca festival (31 October–2 November) will celebrate Ireland as the birthplace of Halloween.

New Puca festival will be celebrated in Ireland as the birthplace of Halloween between October 2 to November  2 and will take place in Meath and Louth which is rooted in ancient tradition.

There will  bestunning light installation, playful interactives and awe-inspiring bespoke projects at Puca which will add on to the many reasons for coming to Ireland during Halloween.

Guests can experience delectable harvest-inspired food, folklore and enjoy the flame and fun in the playful puca (fairy shapesshifters).

The towns of Athboy and Trim, County Meath and Drogheda in County Louth are the main location for the festival events having rich histories.

The first Samhain festival was held at Athboy  where local lighted the sacred Samhain flame on the historic Hill of Ward.

Drogheda is known to be the oldest towns on the island while Trim is home to the largest Anglo-Norman castle in  Ireland.

Samhin is the old irish for ‘summer’s end’ and marks the end of the old Celtic Year and the beginning of New Year. Halloween originated in the ancient Irish and Celtic tradition.

According to the Celts this was the time of transition and the veil between the old and the new world came down. The spirits of those who passed away last

Oíche Shamhna (Night of Samhain) moved on to the next life.