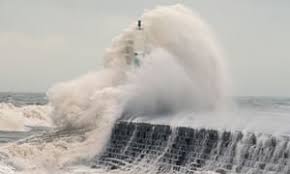 Storm Eleanor brings heavy rain with winds of up to 155 kilometres per hour devastating hundreds of thousands of home and businesses from Ireland’s west coast to France leaving most of the area without power.

There was heavy flooding in Ireland and forced closure of France’s Eiffel Tower while a second-highest level of alert was announced for the west and north-west of Ireland.

Cambrai, northern France was hit by a wind speed of 147kph while Ireland’s fourth-largest city, Galway was hit by the storm and high tides forced road closures wreaking havoc for shop owners.

Eight people were injured in Switzerland as a gusting winds blew a train off its tracks.

At least 26 others were injured across the country and the Eiffel Tower was closed and flights to and from France were delayed as the storm made its way east into continental Europe.

Officials suspended ferry lines between the island and mainland France as the winds fanned at least three forest fires in Corsica.

Ireland’s Electricity Supply Board (ESB) mentioned that at one point of time 150,000 homes and business were without electricity but later the power was restored.

Derek Hynes, operations manager for ESB said that he was hopeful  that it being the last week of a lot of people’s Christmas holidays, they will have power back to everybody by tonight.

However, the weather service Met Eireann’s second-highest level of alert remained in place for the west and north-west of Ireland stating that a combination of high tides and exceptionally high seas would result in coastal damage and  flooding.

Charles de Gaulle airport, north of the capital saw flight delays and on one road scaffolding collapsed on parked cars.

Weather authority Meteo France mentioned that a record wind speed of 147 kph was recorded in the northern city of Cambrai.

Around 49 of France’s 101 departments was on orange alert due to the weather, advising people to limit travel and look out for falling objects.